This Ral Partha skeleton was one of those minis I've got that refused to be painted properly. I remember getting this guy in the blister back in time. His first colors came in enamels, and stayed that way for some time before being stripped in the late 2000s. 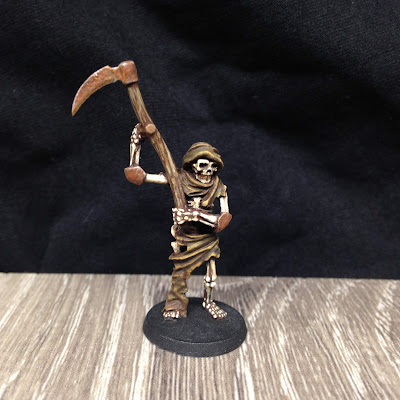 I tried another pass but the anatomy of the sculpt was not readily very paint-able: there are areas bulked out of proportion for purposes of strength and ease of casting, that render the bones far too thick for a sensible final display.

The final attempt was done straight over top the previous paintwork, and centered on a dark base coat that built up through off-white bones, which are painted on top of the physical bones. I guess there's no easy way to describe this: because of the thickness of the bone-members, I had to depict the bones atop the sculpt several times, around the girth of the sculpt. So if one reviews a 360 circumnavigation of this guy he will appear to have more bones than anatomically feasible, but from any one angle he looks really good, with gangly thin bones. 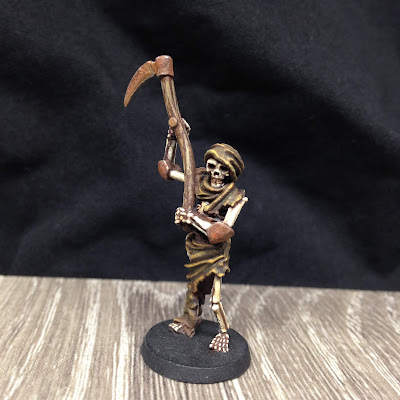 The shreds of cloak clicked into being after several frustrating failed attempts, I started washing it with a gross pea green color and some other vomity earthtones and it seemed to operate nicely. A little rustiness on the scythe blade and some chalky and juvenile wood-grain stuff on the handle-pole and suddenly I had a decent looking mini... nicely balanced overall and conquering the awkward thick parts by simply keeping them in the dark colors. 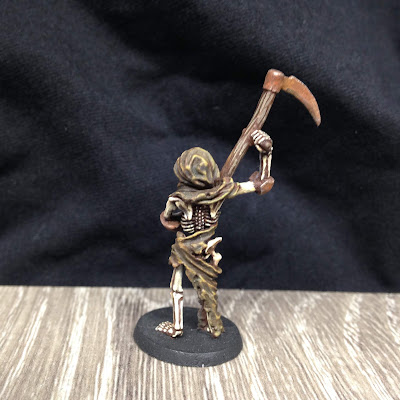 Seeing this mini complete also made me decide that from here on out all restored minis must have decorated bases, and in most cases cannot be on the base they were cast in. This guy could do so much better were he standing on something interesting, it would carry so much better.
Posted by Ghola Scale at 9:15 PM